This is dedicated to our friendly, vibrant, and most importantly grassroots user community on Facebook. I took most of the topics here from the most popular conversations we had there.

If you were following the Silicon Valley series as I did, you couldn't miss this hilarious "I'm not a VR guy" piece by Richard from Season 4, Episode 8:

After watching this, I couldn't shake off the sneaky feeling that the whole "VR thing" is predominantly misunderstood, so I decided to take the first stab at clarifying the subject.

I would like now to start with some common background covering the following interconnected subjects:

There's a lot to talk about, so let's get right to it!

Let's first differentiate between a Camera and a Camera Rig. So by "camera" I mean a single electronic device with a single charger, single ON/OFF button and single storage unit, whether internal or replaceable. And it's either have an internal 360 stitching or at least it's capable of synchronizing both the video and the audio channels on the frame, which means that it handles 2 or 3 video streams or, if there's more, it must have some very powerful and sophisticated hardware and firmware.

Let's give a few examples of cameras that are already being sold and have publicly available customer reviews, starting from the simplest one, a two-lens camera.

Ricoh Theta was probably the first of the kind so it deserves our special attention: So what's so special about this camera except its sleek design and being the first on the first of the kind on the market?

It's super simple, it doesn't matter how you handle the camera, upside down, side to side or turning it in circles, the images will come out perfectly aligned. Simply put, it knows its position in space, and it aligns the output images so that their horizon line will be perfectly parallel to the real one. And it has a one button operation, which we're clearly used to from years of usage of regular cams and smartphones.

Ricoh doesn't rule alone any longer and many others have jumped on the bandwagon.

Samsung have swiftly followed with the first generation And then the second one

LG has its own counterpart 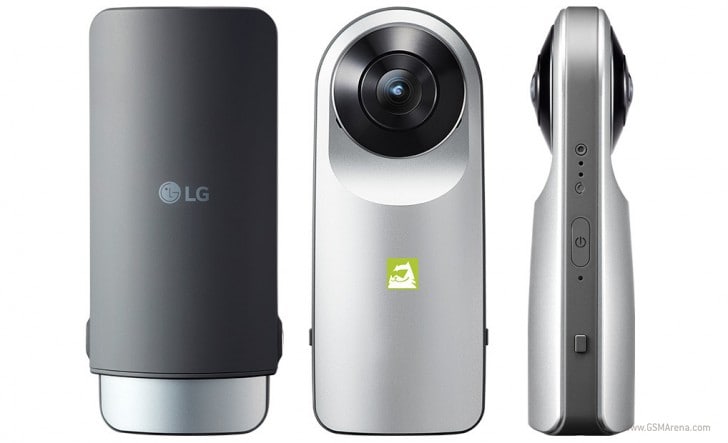 And so on and so forth.

So what are pros and cons of this type of camera?

Why would one need a VR headset? Good question... FB, YT, Twitter and countless smaller companies have 360 playing apps.

There are two ways to display 360 content - a special video player app that responds to the phone's location in space, and changes the viewing direction when users tilt their phones. Most if not all of them also support manual control so that users can change the viewing direction by a finger swipe, without moving the phone at all.

On the other hand, there's just one way to view 3D 360 content, and it's a VR headset. For 3D 360 you've got to supply two slightly different views for each eye, which means you have to have a special viewing device that supports this feature. Any 3D TV can show 3D with glasses, but they don't support 360 videos, but this can be resolved on the software level, assuming that the TV's have enough hardware to decode very high-res videos, that are needed for VR. Speaking of TV's, BTW, there were numeric efforts to build the so called "Glass Free 3D TV's", based on lenticular lens screen or Parallax Barrier screen. The latter was also used in luxury vehicles such as Range Rover to display different types of content to the driver (GPS) and the passenger (TV), but that's hardly relevant to VR...

Anyway, let's get back on track - VR headsets - there are three main types of these:

There are many different VR playing apps, we've tested most if not all of them, and the winners in this category are:

Last but not least, if you plan to build your own app that can play 2D/3D 360 content, you may consider using the following API's:

Obviously, the whole thing is developing and it's not smooth and easy enough for the consumer market. We shall wait and see how it goes :)

In Lucinda Kingham recent article “Why brands should avoid the VR bandwagon” she wrote, “3D TV died due to…

Earlier this week a very interesting article was published on VentureBeat titled: VR startups go into cockroach mode to…